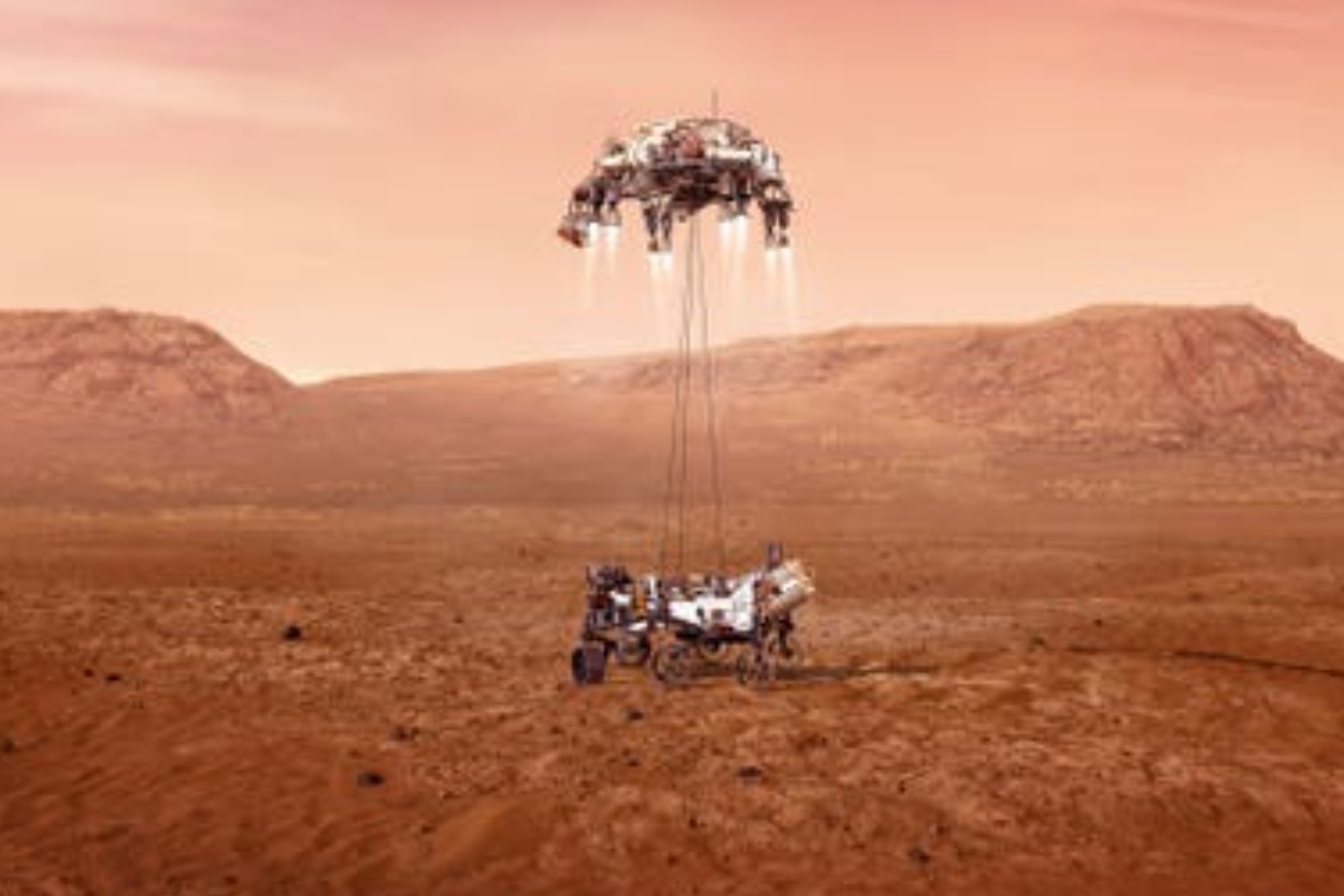 Nasa’s Mars Perseverance rover safely landed on the red planet and sent back images, marking an “amazing accomplishment”, the space agency has announced. Its mission is to search for signs of ancient life, and explore and collect samples for future return to Earth from diverse environments on Mars.

After the rover, which blasted off from Earth last July, entered the Martian atmosphere there were “seven minutes of terror” as it made its way to the surface.

It took more than 11 minutes for news of the safe landing to reach Earth, arriving at just before 9pm (GMT).

Steve Jurczyk, Nasa’s acting administrator, said: “It’s amazing to have Perseverance join Curiosity on Mars and what a credit to the team.

“Just what an amazing team to work through all the adversity and all the challenges that go with landing a rover on Mars, plus the challenges of Covid.

“And just an amazing accomplishment.”

Perseverance’s twitter account also marked its arrival on the red planet, tweeting that it had landed safely, and posting pictures from the rover of it’s “forever home”.

The arrival of this image, and second taken from behind the rover, showing a flat, rocky surface, was met with a second round of cheers as mission control celebrated the achievement.

More images, videos and sounds from the landing are expected to start arriving from the rover over the weekend.

But early indications suggest Perseverance had landed on a relatively flat surface, and not too far from some sand dunes which will have to be navigated in order to reach the delta.

Perseverance will spend the coming years scouring for signs of ancient microbial life in a mission that will bring back samples from Mars to Earth and prepare the way for future human visitors.

Images from Nasa showed the rover had landed in tiny safe space, surrounded by red areas that would have been very difficult to land in.

Showing slides highlighting areas of various colours, Nasa’s Entry, Descent and Landing lead official Allen Chen, said: “I was just worried about what would kill us on landing.

“Red is generally bad, and you can see that the system managed to find a nice blue spot in the midst of all that red – all that death that’s out there for us.

“So we found a parking lot.”

Perseverance deputy project manager Matt Wallace said: “The good news is the spacecraft, I think, is in great shape.”

Nasa suggested flights of the Ingenuity could begin in the spring, with the first science being carried on in the summer.

Speaking at a press briefing after the landing, a number of Nasa experts described their relief and joy at the success.

They added that the year and mission had been challenging due to measures imposed because of the pandemic. To recognise that challenge, a plaque referencing Covid-19 has been attached to the rover.

“And that plate is really there to symbolise the challenge that not just our team was facing, but everybody has been facing,”

“It has been a tough year, it has been tough to do this mission in this environment,” said Mr Wallace.

Jennifer Trosper, deputy project manager, said one of the ways the team had dealt with having to work remotely was by logging into a monitor on wheels which moved through the mission’s headquarters to enable discussions.

Mr Wallace said he had worked on a number of other Mars landings, but “as of this moment right now, this is the best landing on Mars”.

The research destination of the rover – a scientific laboratory the size of a car – is Jezero crater, a 28-mile-wide depression containing sediments of an ancient river delta.

Scientists know that 3.5 billion years ago, Jezero was the site of a large lake, complete with its own delta.

They believe that while the water may be long gone, somewhere within the crater, or maybe along its 2,000-foot-tall (610 metre) rim, evidence that life once existed there could be waiting.

Any hunt for these signs will include the rover’s cameras, especially Mastcam-Z, which is located on the rover’s mast.

The mission’s science team can task Perseverance’s SuperCam instrument – also on the mast – to fire a laser at a promising target, generating a small plasma cloud that can be analysed to help determine its chemical composition.

If that data is intriguing enough, the team could command the rover’s robotic arm to move in for a closer look.

Perseverance will gather rock and soil samples using its drill, and will store the sample cores in tubes on the Martian surface ready for a return mission to bring around 30 samples to Earth in the early 2030s.

Researchers from the UK will study the samples that are returned from Mars.

The researchers are supported by more than £400,000 in funds from the UK Space Agency (UKSA).

Selected samples will be collected by drilling down to several centimetres and then sealed in sample tubes and stored on the rover.

When the rover reaches a suitable location, a cache of tubes will be dropped on the surface of Mars to be collected by the Sample Fetch Rover, being developed by Airbus in Stevenage, which will take them to the Nasa Mars Ascent vehicle.

Perseverance also carries the Ingenuity Mars Helicopter, which will fly short distances from the rover in the first attempt at powered, controlled flight on another planet.

A successful test of the helicopter could lead to more flying probes to survey the landscape on other planets.

It will also trial technologies to help astronauts make future expeditions to Mars.

These include testing a method for producing oxygen from the Martian atmosphere, identifying other resources such as subsurface water, and improving landing techniques.

They also involve characterising weather and other environmental conditions that could affect future astronauts living and working on Mars.