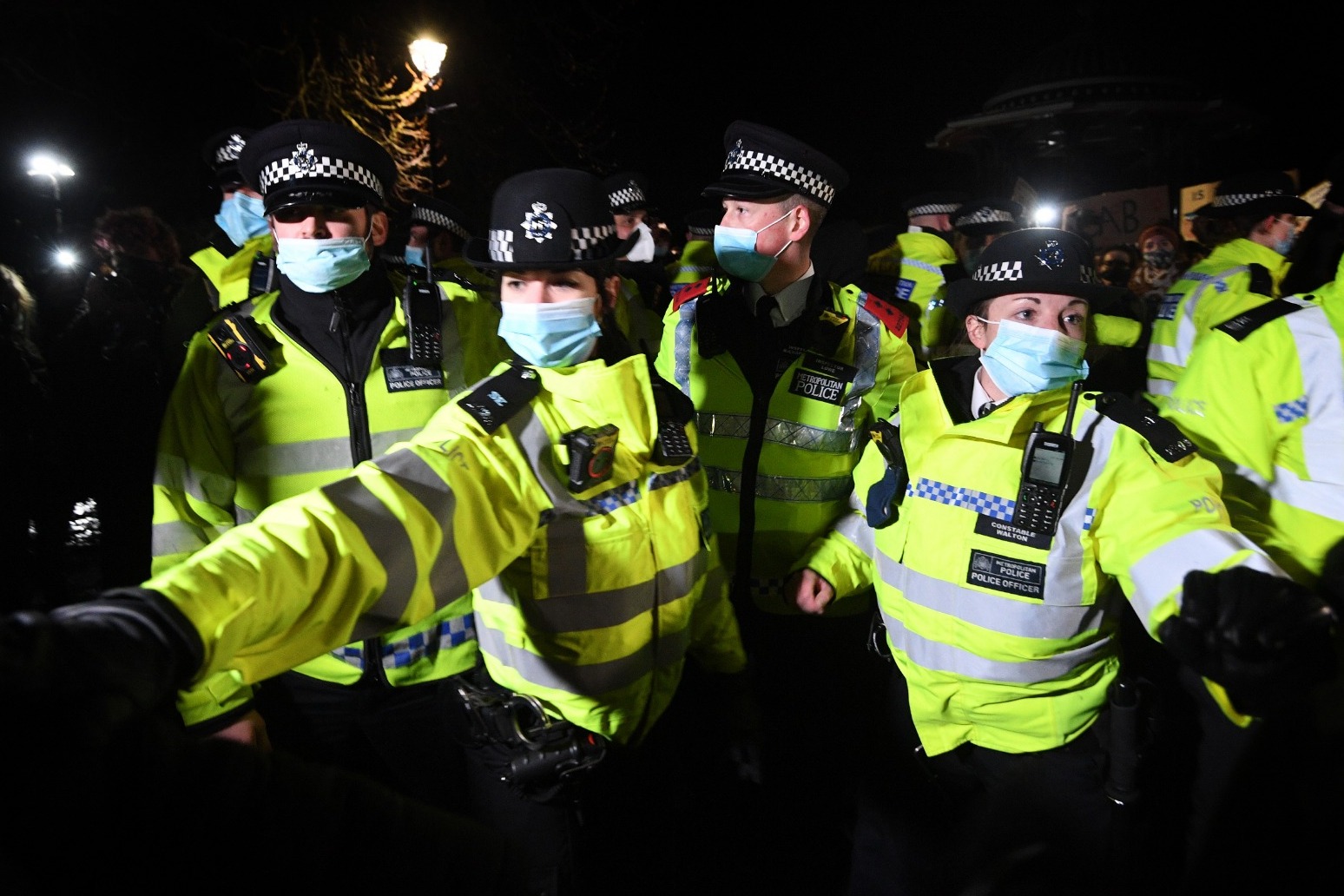 The Metropolitan Police force is under intense pressure to explain its handling of a vigil in memory of Sarah Everard, with Commissioner Dame Cressida Dick urged to consider her position.

The event in Clapham, south London, was largely peaceful, but scuffles broke out at the front of a crowd as police surrounded a bandstand covered in floral tributes to the 33-year-old marketing executive.

Male officers could be seen grabbing hold of several women before leading them away in handcuffs, to shouts and screams from onlookers.

In the early hours of Sunday, Assistant Commissioner Helen Ball said police were put into a position “where enforcement action was necessary”, adding that four arrests were made for public order offences and breaches of coronavirus regulations.

She said: “Hundreds of people were packed tightly together, posing a very real risk of easily transmitting Covid-19.

“Police must act for people’s safety, this is the only responsible thing to do. The pandemic is not over and gatherings of people from right across London and beyond, are still not safe.

“Those who gathered were spoken to by officers on a number of occasions and over an extended period of time. We repeatedly encouraged those who were there to comply with the law and leave. Regrettably, a small minority of people began chanting at officers, pushing and throwing items.”

The assembled crowd chanted “shame on you” as police led people away at the vigil, while during another confrontation a distressed woman could be heard telling officers “you’re supposed to protect us”.

Home Secretary Priti Patel described footage from the vigil as “upsetting”, adding: “I have asked the Metropolitan Police for a full report on what happened.”

Mayor of London Sadiq Khan said the scenes were “unacceptable”, tweeting: “The police have a responsibility to enforce Covid laws but from images I’ve seen it’s clear the response was at times neither appropriate nor proportionate.”

Mr Khan said that he was in contact with Dame Cressida and was “urgently seeking an explanation”, while Liberal Democrats leader Sir Ed Davey called on her to “consider” her leadership of the force.

In a letter to the Commissioner, Sir Ed said the scenes of the policing of the Clapham Common vigil were “utterly disgraceful and shame the Metropolitan Police”.

He added: “This was a complete abject tactical and moral failure on the part of the Police.

“We therefore call on you to consider your leadership of the service and whether you can continue to have the confidence of the millions of women in London that you have a duty to safeguard and protect.”

Labour leader Sir Keir Starmer described the scenes as “deeply disturbing”, adding: “Women came together to mourn Sarah Everard – they should have been able to do so peacefully.

“I share their anger and upset at how this has been handled. This was not the way to police this protest.”

Reclaim These Streets said the group was “deeply saddened and angered” by scenes of officers “physically manhandling women at a vigil against male violence”.

The group added: “This week of all weeks the police should have understood that women would need a place to mourn, reflect and show solidarity.

“Now is the time for the police and the Government to recognise that the criminal justice system is failing women.

“Tonight, it has failed women again, in the most destructive way. We will keep fighting for women’s voices to be heard and to matter.”

Hundreds of people converged on the south London park despite an official vigil being called off earlier in the day due to police warnings over coronavirus restrictions.

Prime Minister Boris Johnson said he would light a candle for Ms Everard with his fiancee Carrie Symonds, adding that he would be thinking of her family and friends.

He tweeted: “I cannot imagine how unbearable their pain and grief is. We must work fast to find all the answers to this horrifying crime.

“I will do everything I can to make sure the streets are safe and ensure women and girls do not face harassment or abuse.”

The Duchess of Cambridge was among those to visit the make-shift memorial at Clapham Common on Saturday to pay her respects, and was seen pausing in front of the sea of flowers.

It is understood Kate, who is said to have brought daffodils to the memorial, made the visit in part because she remembers what it felt like to walk around London at night before she got married.

Elsewhere, Justice Secretary Robert Buckland said the Government would look at ways to improve the sharing of information about offenders between agencies and with people at risk.

Writing in the Sunday Telegraph, he said: “This Conservative Government introduced Clare’s Law as a way of helping to protect people from abusive and dangerous relationships and we will consider whether this approach could be extended to stalking and other offences that give grounds for real concern.”

Meanwhile, a fundraiser set up by Reclaim These Streets for women’s charitable causes passed its target of £320,000 on Saturday evening.

Earlier in the day, the serving Metropolitan Police officer accused of murdering Ms Everard was remanded in custody after his first court appearance where it emerged her body was found inside a large builder’s bag.

Police constable Wayne Couzens, 48, is charged with kidnapping and murdering Ms Everard, who went missing while walking home from a friend’s flat in south London on March 3.