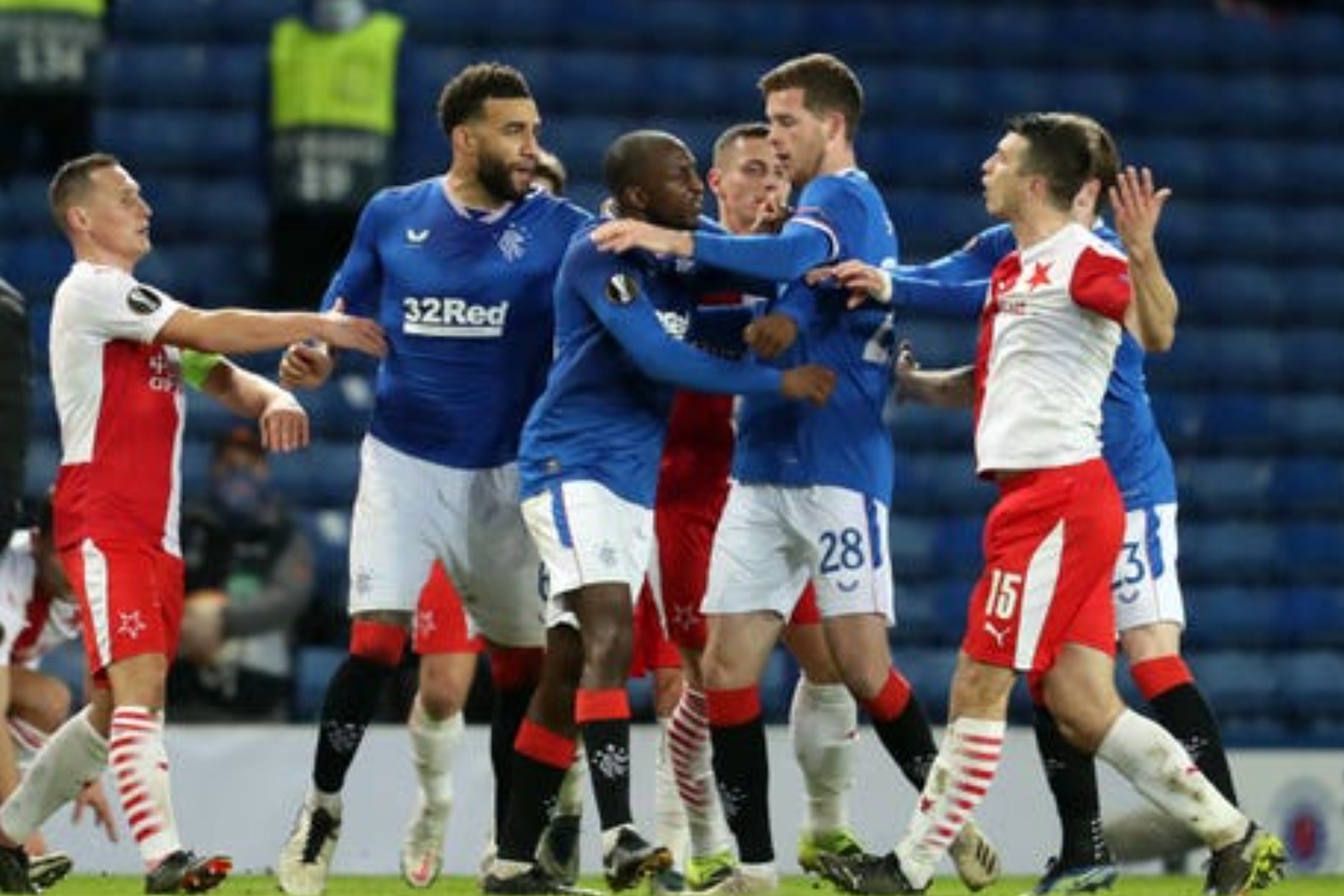 Glen Kamara and his Rangers team-mates reacted with fury as they claimed Czech defender Ondrej Kudela had whispered a discriminatory slur into the midfielder’s ear while cupping his hand.

Slavia rejected the racism claims and accused Kamara of assaulting Kudela in the tunnel after the final whistle.

Now European football’s governing body has announced it is launching a probe.

“UEFA is aware of an incident which occurred in the tunnel after the end of the match and which involved some players of both teams,” a statement read.

“We are waiting to receive detailed reports of the match officials who were present at the game before commenting further.”

Gerrard has vowed to stand with Kamara as he warned UEFA it must not sweep the alleged incident “under the carpet”.

The Ibrox boss – who saw Kemar Roofe and Leon Balogun both sent off as goals from Nicolae Stanciu and Peter Olayinka sent the Czechs through – said: “I have a very, very strong relationship with Glen Kamara.

“Glen Kamara to me is one of my own, like the majority, all in that dressing room. I 100 per cent believe what he is saying in terms of the accusation.

“Other players around him heard it so I will stand toe to toe with Glen Kamara and I’ll deal with this however Glen wants to deal with it.

“I am proud of all my players, tonight showing solidarity and from the top of this club to the bottom we stand with the players. This situation is over to UEFA now. I just hope it doesn’t get brushed under the carpet.

“I feel angry. It’s extremely disappointing. There is too much of it happening around football. The Slavia player has caused this and he has also caused a situation like this to escalate even further because straight away you get the fans joining in and the racism grows and grows.

“Something needs to happen quickly. That is above me. But 100 per cent I stand beside Glen Kamara, whatever happens going forward.

“UEFA will take this upon them I’m sure they will speak to both players and we will let other people deal with it. All I can confirm is that my player tells me he was racially abused.”

But Slavia countered Rangers’ claims, insisting Kudela was the victim of an attack from Kamara.

They also took aim at the rest of Gerrard’s team, accusing the Ibrox club of “unprecedented malicious play”.

Ondrej Kolar was left with a fractured skull and a three-inch gash on his forehead after Roofe planted his studs into the Slavia keeper’s face with a brutal high challenge, while Balogun also

In a statement, Prague bosses said: “Slavia resolutely denies the disgusting accusation of one of the team captains Ondrej Kudela of racist behaviour.

“After one of the brutal fouls, Ondrej Kudela spoke to one of the Rangers players. ‘I told him ‘You f****** guy’. It was said in emotions, but I absolutely deny there was anything racist in those words,’ Kudela stated.

“Slavia players faced an unprecedentedly malicious play from their opponents. They have never experienced such play in any game they participated in the modern history of the European competitions.

“Many brutal tackles resulted in injuries of our players. Goalkeeper Ondrej Kolar travelled to a hospital with 10 stitches on his head.

“After the end of the game, the team was not allowed to enter the dressing room.

“Ondrej Kudela was assaulted by Kamara and hit with fists in the head with manager Steven Gerrard witnessing the incident.

“Even the UEFA representatives who were also present on the site of the incident were shocked by this behaviour.

“The team is now safe accompanied by the Scottish police.”

On Friday morning a Police Scotland spokesperson said: “No reports of criminality have been made by either club in connection with last night’s match. Police Scotland has contacted club officials and assured them that should any allegation be received it will be investigated thoroughly.”